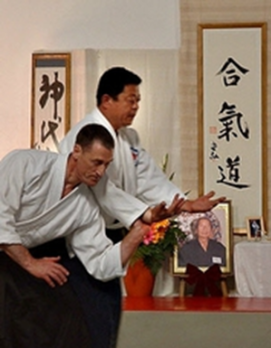 Ken started his involvement in martial arts back in 1974 with Shotokan Karate. In the 80's he began to study aikido techniques and weapons with William Coyle then in the 90's focussed his studies on Iwama Ryu Aikido with Gerry Hinton. He has studied directly many times with Morhiro Saito sensei, his son and successor Hitohira Saito sensei and their senior students.

While training in Iwama, Japan in 2011 Ken was awarded 4 th dan by Hitohira Saito sensei.

More recently, Ken has been exploring other martial arts such as Systema and incorporating some of their movements and drills into aikido training to emphasise some of the common principles.